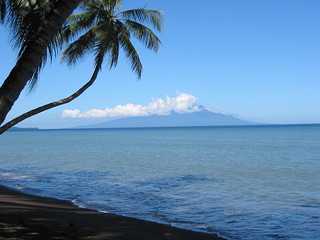 Once upon a time, there was a grievous war. Many people lost their homes and fled to wherever they could. A compassionate king agreed to take 20,000 refugees and provide for their needs. They were assigned to tents on two different islands. Every week, the king sent a ship with food, fresh water, and other necessities to each of those islands, all at the king’s expense. He appointed a man on each island to distribute the goods fairly and to make sure that everyone got fed.

On the first island, the store manager built a store and sold the King’s supplies to both refugees and the local population. He grew rich. He used part of his wealth to help build houses for the refugees, and to make a big show of giving away a bag of groceries once a week to a needy refugee family. He was very proud of his accomplishments. After a while, this manager hired many people to help with his grocery business. It was a great business, in that the food was all supplied for free to him, but brought good money in. Indeed, the king’s supply was more than they needed to keep the business running. Much of the food was discarded when it spoiled. When his employees noticed the local churches handing out free food to the poor, they were concerned that this might cut into their profits. So, they talked the local mayor and his officials to make a law that only the king’s authorized representatives could distribute food. Anyone else distributing food had to pay royalties to the king’s food manager. Many of the poor, including a great number of the refugees, often had to resort to dumpster diving, scavenging, and even theft to feed their families.

On the second island, the store manager organized volunteers from among the refugees to set up dining tents and run an efficient food service. He also supplied local churches with food ministries and encouraged them in their work. Nobody had to go hungry. This store manager also sold some of the excess produce to the local population, and used the proceeds to help the refugees become productive members of society. He also helped them organize some local farms, using some of the king’s provision as seed to grow crops and to buy dairy cows and chickens. He also encouraged and helped others who were involved in feeding the hungry. Eventually, the second island grew enough food to feed themselves and to welcome even more refugees. Many were saved from death.

After a year, the king came to visit both islands, starting with the second island. He was very impressed with the great good his generosity had done, and how the store manager had multiplied the gifts he had given by increasing local food production. He rewarded the manager and promoted him in the kingdom.

Then he visited the first island. The store manager there showed him his impressive grocery stores, with branches all over the island, selling the king’s food at premium prices. He showed him a few houses that he had built, and told of the wonderful weekly food distributions to the most needy family they could find—usually someone near starvation. In spite of the manager’s efforts to distract him, the king also saw people who told of the starvation and hardships on that island, even though it was supplied the same as the second island. The king was most displeased, and threw the manager and his assistants all in jail, and put the manager of the second island in charge of the first island, as well. He also provided him with a new ship and crew so that he could travel freely between the islands.